”The four elements, like man alone, are weak. But together they form the strong fifth element: boron” - Brother Silence 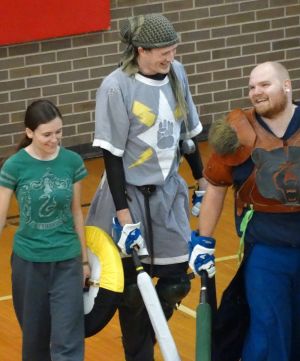 An aspiring young scout who plays the class of scout since the summer of 2012 and enjoys scouting. He often scouts during battle games while wearing his green sash. He can often be seen carrying his bow that he uses as a scout while scouting. Most people yell archer when they want his attention.

Hit things with a big shield and stick for a few months.

Enjoyed pointy hats and fireballs for a while.

Now getting into curses and armor.

-Matt in the hat

Member of the Wardancers (Wave Dancer)