Baron Mischief-at-Arms Sereen, of the Duchy of Terra De Votum, Kingdom of the Desert Winds

Sereen began her Amtgard life on September 1, 2012 in Sun's Haven when it was in the Kingdom of Dragonspine. The first class that she got to 6th level was Archer.

Sereen's first love is Arts and Sciences and they strive to increase skills in 3d art. Sereen is particularly enamored with creating Dioramas.

Sereen has made a concerted effort to help raise peoples spirits and help others through teaching. They are a constant and dedicated crafter.

Currently Sereen resides in the Duchy of Terra De Votum with her partner, Dreadlord Standardbearer Blud Skullbiter. They both are in service to Countess Guardian Drū-Kära Silverblade.

Sereen's man at Arms is Shadow who formerly served as their champion. He has since been called to the Empire of the Iron Mountains by the forces of Mundania.

While Sereen currently resides within the Kingdom of the Desert Winds, they may drift wherever the winds blow, and their quest for excellence in the arts. 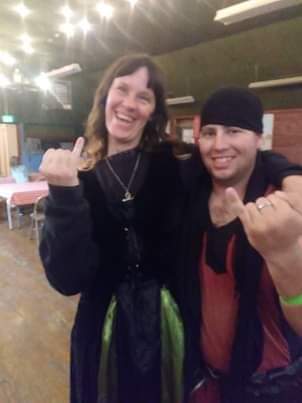