Thane Sir Shefanhow, of Irongate of the Golden Plains 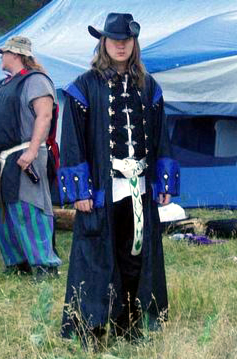 On Friday, November 7, 2008, Thane Sir Corwinthalanos Jaelin Shefanhow was lost to us. He was loved and respected, and will be missed.

Please feel welcome to offer condolences in the discussion thread of his page. 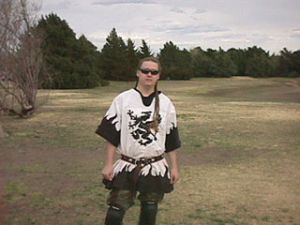 An accomplished Serpent Knight with awards in diverse areas, he was best known in the Arts and Sciences for his leather working skills and his Bardic abilities.

He was also a relatively well-known fighter, having taken first place in the Interkingdom Iron Man Tournament at The Gathering of the Clans in 2003. At Clan 2004, he became a Nighthawk and a Knight of the Serpent.

He has also placed 2nd in a vast number of tournaments in EH and GP over the years, and has earned an 8th Order of the Warrior through both Consecutive Wins and Tournament Victories. Unfortunately, the elusive tourney wins required have always stayed one Sword Knight out of his grasp.

On Saturday, November 8, 2008, Thane Sir Corwinthalanos Jaelin, aka Shefanhow, was lost to us. May he rest in peace.

Shef had the following Squires:

Shef was Squired to Sir Warblade prior to his Knighting.