Escutcheon often the term used in heraldry for the shield displayed in a coat of arms. An inescutcheon is a smaller escutcheon borne within a larger escutcheon. The term crest is often used incorrectly to designate this part of the coat of arms. 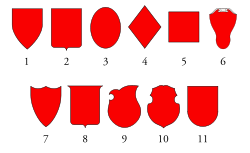 The term "escutcheon" also refers to the shield-like shape on which arms are often borne. The escutcheon shape is based on the Medieval shields that were used by knights in combat. Since this shape has been regarded as a war-like device appropriate to men only, ladies customarily bear their arms upon a lozenge, or diamond-shape, while clergymen bear theirs on a cartouche, or oval.

Derived from its meaning in heraldry, the term "escutcheon" can be used to represent a family and its honour. A family member who does something shameful can be described as a "blot on the escutcheon."

See Divisions of the Field