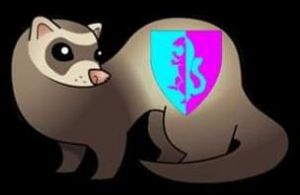 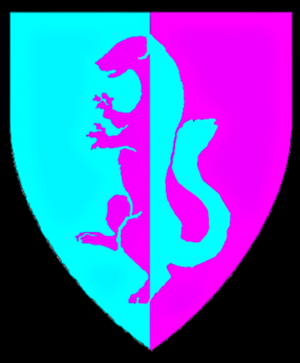 Shroudstar began her journey in Amtgardia in Neverwinter, at the previously named Ember Shoals in 2014. She briefly visited Rivermoor and fought at the Ivory Tower. She began her sojourn into Amtgard offices when she joined Falcon's Moon in the Emerald Hills, and with the help of numerous others, assisted her park into becoming a barony. She forged a tenuous alliance with Howling Plains during that time, which involved a lot of beneficial infighting.

Shroudstar's first memory is of her washing up on the shores of the Ember Shoals. She had no knowledge of her family, of her past, or of what caused her to be in the waters. She is fairly certain she is human, because she looks like it - but she has noticed she has a very strong affinity for water. She picked her name at random, looking through other peoples' names and choosing things that sounded cool together. After wandering around, she was taken in by a pirating group, called the Bilgewater Mutineers. She quickly rose in station, and was the first mate for a few years. She left her crew when she journeyed far from the waters of Neverwinter, but kept her pirate spirit. As she got further and further from the water, her mental stability decreased too. This got her in trouble when she first became baroness of Falcon's Moon and went a tidbit mad with power. She successfully invaded Howling Plains, and then defended against a counter-invasion. With that victory under her belt, her hubris SKYROCKETED. She declared war on the entirety of the Emerald Hills. This caused her closest ally, Rhadamanthys, to hire an assassin, User:Art. Art shamelessly stabbed Shroudstar while she was monologuing. She was later, secretly, resurrected as a minion by Sir Worrak Darkedge. After this event, Shroudstar was gifted power to obtain her goals, but she could not handle the amount given to her by Sir Worrak. Her insanity returned, but this time bolstered by immense power. She began collecting magical creatures and siphoning their power in order to create flying pirate ships to conquer any land that stood between her and making Falcon's Moon the biggest power in the lands. It was really quite ridiculous. She was thankfully brought down by the people of Falcon's Moon. She is now currently sitting voluntarily in jail, after the overwhelming power was removed from her. She seeks penance, a stable mental state, and for no one to ever mention how stupid her plans were. Well, she was... until she got really offended at a remark by AmtWiki:Nim, threatened to invade Red Storm, and then did that. Whoops.

Protector in 2019 by Amethyst Panther

Baronette in 2019 by Kal Thrax

Dreamkeeper in 2020 by Bloodwood T. Pirate

Jarl (or as Shroudstar the pirate jokes, YAR-L) in 2021 by Kal Thrax

Shroudstar is a Rogue in Training (RIT) through the Rogue Company as of May 28, 2022.