Countess Silvia Ellibayne, of the Lands End and Ivory Tower 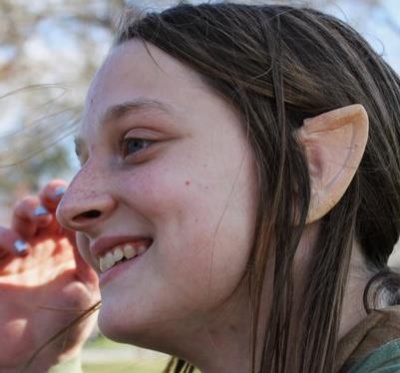 Silvia began Amtgard in June of 2007, in the then Shire of the Ivory Tower. She is an incredible garber, and general creator of A&S, as well as an able spell-caster. She has also begun to develop as a fighter, and is generally an awesome person. She also wears flurby elf ears, but it's okay, because they look nice.

Silvia's favorite aspect of Amtgard is Arts and Sciences. She loves to create, teach, and especially judge. Silvia states that the best things in Amtgard are seeing garb she has made on other people and watching new artists pick up crafts they never would have without this game.

In 2014, Silvia moved up to Land's End under courtship of Kite

In 2018 Silvia was the Regent of Rivermoor. She met her personal goal of "running a kickass dragonmaster." By way of culling some entries to a lower bracket, Silvia brought the idea, then called "Junior Varsity A&S" to Rivermoor.

Silvia does her best to avoid groups.

Silvia is liege to Fallaryn and Eevee by rite of Nobility