Minstrel Sir Snicker Furfoot, of The Kingdom of the Wetlands 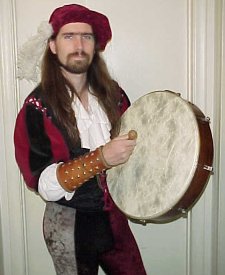 Snicker Furfoot began as a character in a MERPS campaign. He was originally described as "a prankster halfling with a hoopak in a world of hobbits." In early 1993, when some old friends from high school (Ironpaw, among others), told him about this "game where you can dress like a D&D character," he dropped his pending admission to the SCA and showed up for the first day at a park then known as Shadowvale, in Alamogordo, New Mexico. His first choice for class was Bard, and it continues to be his favourite. He attended his first Clan that same year, and was Squired to Sir Rufus Grimwulf.

He played in Shadowvale for several years before emigrating to the far off land of Knoxville, Tennessee, where he helped found Mystic Glade* with his friend and fellow Shadowvale emigre, Kalidor. After several more years, he moved to Houston, where he discovered a whole new way to play. It was as a member of the Kingdom of the Wetlands that Snicker was Knighted into the Order of the Flame.

Along with his best friend, Feral Lynn, Sir O'Banion and Hawklynn Stormcloak (That Guy), founded and performed as 4 Bard Harmony. After renaming the group to Regimental, the band became inactive, but then reformed with new members, and now meets on rare occasions to stun the locals with mesmerizing performances. He also helped Feral with Finkorama for many years, and hopes to see it re-launched some day.

Snicker has become inactive of late, though he does rarely appear at Amtgard events.

Snicker was the keeper of the Amtgard Atlas (after its original compilation by Sir Vaargard Malorius), which he ran until he transferred the content to Rewth who has added it to the Online Record Keeper. 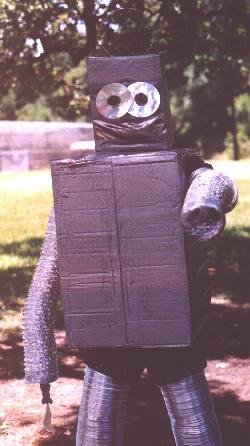 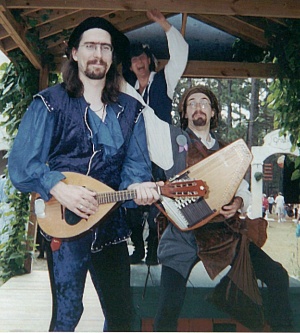 Snicker with the Brobdingnagian Bards 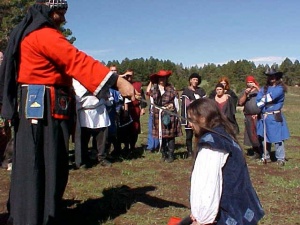