N. A sharp pointy metal object. A sword fundamentally consists of a blade, a hilt, and a pommel, typically with one or two edges for striking and cutting, and a point for thrusting. The basic intent and physics of swordsmanship have remained fairly constant through the centuries, but the actual techniques vary among cultures and periods as a result of the differences in blade design and purpose. 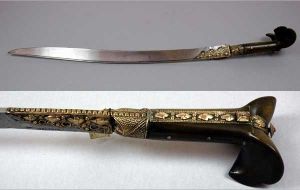 The Ottoman Empire, with its emphasis on cavalry, produced many fine swords, such as the yataghan sabre. This example could be up to 400 years old. It has a curved and grooved steel blade, a double-lobed horn grip and leaf decoration in repoussé silver or copper on the blade and grip. The yataghan served as the model for a double curved bayonet popular in Western Europe in the mid- 19th century.

Humans have manufactured and used metal bladed weapons from the Bronze Age onwards. The sword developed from the dagger when the construction of longer blades became possible, from the late 3rd millennium BCE in the middle-east, first in arsenic copper, then in tin-bronze. The oldest sword-like weapons are found at Arslantepe, Turkey, and date to around 3300 BCE. It's however believed that these are longer daggers, and not the first ancestors of swords. Swords longer than 90 cm were rare and not practical during the Bronze Age as this length exceeds the tensile strength of bronze, which means such long swords would bend easily. It was not until the development of stronger alloys such as steel that longswords became practical for combat. 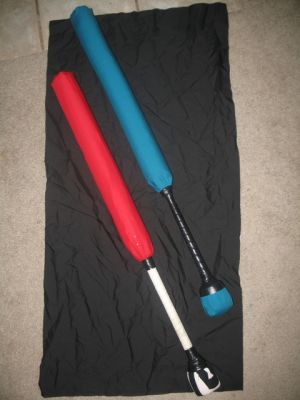 Typical amtgard swords, made in the Celestial Kingdom

In amtgard our swords are "foam padded replicas of the real things". To tell the truth our swords are generally round or "Omni Blades". That look very little like real swords.

A Sword can be made to fit into any of the following categories; Dagger, Short, Long, Great, Madu, Hinged, Thrown, Bow, and Siege Weapon. They are available, in some form or other to every class, though they do sometimes cost Spell Points for Magic Classes .