Esquire Man-at-Arms Takaffi Cold-Water, of the Shire of The Riverlands, in the Rising Winds

”No matter how hard you try to honestly reflect a Native American, you just look racist.” 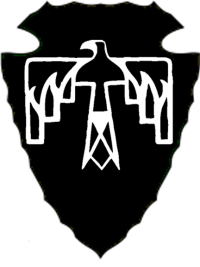 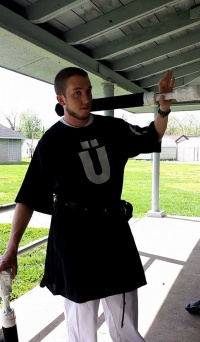 Takaffi Cold-Water is a Native American from the late 1200s, and is a predecessor to the eventual Chickasaw tribe of later centuries. He traveled north where he encountered vikings, and over a long journey found his way to medieval Europe. This journey earned him the nickname Cold-Water from Europeans.

The heraldry of the persona Takaffi utilizes an Indian Arrowhead as the Shield in lieu of the more common European shields, and showcases a Thunderbird. Its blazon is as follows: Sable arrowhead, a native American thunderbird displayed voided argent.

Back To: Amtgard → Chapters → Kentucky → The Riverlands → Riverlandians