"Is any of this at all legal?" - Drake Dragongrin
"Every time she opens her mouth, I'm afraid that I'm going to fall in."

The Grinning Fool from Calypsos Bay

An assassin, mercenary and pirate, born and raised in the odd little hamlet of Evenflow, just south of Goldenvale Proper.

The village was thought to have been lost in an act of aggression by one of its own. However, the truth of the story is far more complex. The story of Tokwan Vaunt begins at the gates of the isolated village with a dying mother, her last wish and a silent newborn bearing a strange mutation. The village elder saw great potential in the child, especially after watching him spring about like a frog and began training him in the art of taking lives. Like many other children in the village, Tokwan's education weighed evenly between combat and social sciences. Never had he considered his daily regimen of battle formation and stealth assassination techniques to be strange, for it was all he knew. Never had he considered the possibility that his happy home was a secret training ground for child soldiers.

Tokwan's strange mutation lent to his skill as an assassin. His ability to leap from sight and blend into his surroundings earned him the codename of 'Phantasma', borrowed from a particular species of Poison Dart Frog. His saliva was extremely toxic, containing a type of poison that affected both the heart and mind. While immune to his own neurotoxin, it made him extremely dangerous to others, especially when coating the edge of his blades with his own spit.

Soon after his twentieth year of birth, Evenflow was burned to the ground by a mysterious mercenary force baring the colours of Blood Honey, a distant land on the Eastern Continent. In his travels, Tokwan eventually discovered the truth of his childhood home, and the Shadow War that was being waged using the forgotten children of Evenflow.

The Soldier of Sorrow

One day, the story of Rucio Vistelli will be told.

"They stay in the kingdom because NOBODY knows who they are!"

Few remember the stage magician known as the Proficinominent Poda, primarily because he was quite simply, awful. His fame arose from the attention he received through his often failed magic tricks. The laughter that would bellow from circus tents and taverns could be heard Kingdom wide.

There is a story however, of a brilliant trick that only Poda could perform. This trick was regularly overlooked by his crowd as they were usually already in hysterics from his 'Detonating Chicken' act. The story goes, that a young boy watched as Poda turned a simple flower into stone, then iron, then burned it away in the palm of his hand. Such a tiny trick compared to his often grandiose failures. The boy approached Poda after his act one night and confronted him about the trick, knowing that the magician was better than he always let on. Poda told the boy that when a joke is good, the room is split between those who laugh and those who don't. But, when a joke is a true groaner, everyone joins against the joke itself. It was a vague answer at best, but the boy felt he understood.

The truth is that Poda was a master of Alteration Magic, capable of transmutating certain objects, manipulating their properties, to create entirely new constructs. Turning the flower to stone, then iron, then causing it to combust in his palm was only scratching the surface of his power. But, Poda is a soft, aloof man of simple pleasures. Chocolate over gold and a hug over crowds of cheers. The Proficinoment Poda, the greatest worst magician of all time.

The Mad Lizard of Mortrigog

One day, the story of Zaza will be told. 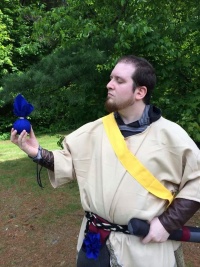 Joining Amtgard in early 2012, recruited by Nexus Crow and Nydgenga Dawnbreaker, Lou appeared first as a masked ninja under the name of Dakhir Nahasaan. After some time of sporadic appearances, Lou got his crap together and now attends as frequently as he can.

Never satisfied with a single persona for too long, Lou often creates entirely new characters on the spot to supplant his nearly manic creative process. Over the years, through writing (both published and unpublished stories), Role Playing and story driven games, he has created a wealth of characters that have lived entire lifetimes. Generations of characters have come and gone and though very few will remain to see new eras, it is Rucio Vist, a character designed to be Lou's direct emulation, that has stood the test of time.