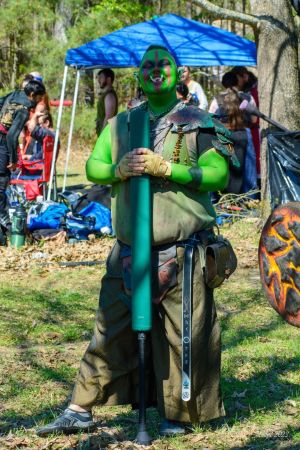 As a young Goblin, Gobbo Stroic, was raised to be the next king of the small Goblin kingdom he was born into. At first he was proud and honored to be taught the things he needed to know about running a kingdom but as he grew older he began to resent his family and his kingdom. When he told his family of this resentment they disowned him and threw him out without a single goodbye. Gobbo was left to wander the many lands, trying to find a home. He would stop at many places but none of them wanted the small green creature. it wasnt until he found himself wondering into a kingdom is when his life had changed. Gobbo had been going through a dumpster when a tall human like man approached him. this man picked the goblin up and stared at him for a moment before saying "youre coming with me, i need to show belle". Gobbo only having heard 'bell' was excited to see a shiny bell..little did he know the man was Cocaire Goldenbow and the 'shiny bell' was Belle Goldenbow. The Goldenbows took in Gobbo and gave him a home in the lands of Sylvan Glade aswell as a new name..Gobbo Stroic was now known as GobboPoP Goldenbow..