”No rest for the wretched.”

Wretch has an origin cloaked in mystery and conjecture. He has served dark armies and powerful deities as an agent of chaos, theories of his past as varied and random as his motivations. Some hear tale of a farmers son trapped in a collapsed home after a vicious attack, driven to madness after being forced to eat from the corpses of slain loved ones to survive and his banishment when he was finally rescued. Others tell stories of an insane wanderer whose acts and deeds were dictated by a skull whose commands only he could hear. And some even whisper of a spirit named TasRa'el who possessed the body of a young monk to reek mayhem on those it felt deserving. None of these stories are known to be true, and none are known to be false. Wretch is not talking, and it's unsure if even he knows...

Wretch began playing Amtgard around late 2002 in the Stronghold of Dark Oasis. Initially a passionate roleplayer who never left persona, he is a well-rounded player that enjoys fighting, roleplaying, and the occasional A&S project. Wretch has been involved in many projects over the years including the co-founding of the second incarnation of the Unseen Hand fighting company, assisting the establishment of Golden Plain's floating crown system, and serving Dark Oasis and Nine Willows during their journeys to both become Duchies of the Kingdom. Wretch currently lives in the Glade of Nine Willows, serving his home province by assisting with its stability and growth. 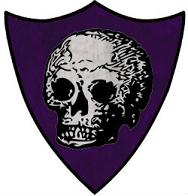 Wretch was squired to Sir Drake Malkov before his knighting. 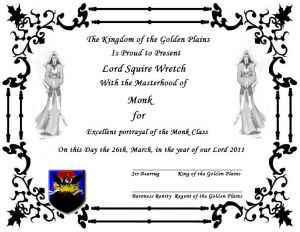