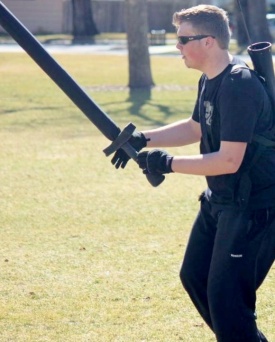 Vanity takes the field with a bastard sword

Vanity "Van" Luxfrey (mundane name: Travis Grover) is a member of Northern Holdfast, Iron Mountains. He has attended Amtgard since January 2014. Relatively new to the group, he started as an Assassin, but continues to experiment with various weapon styles. Vanity constructs his own weaponry and seeks to master construction; he also processes offers for contracts to craft weapons for fellow players. Vanity's primary interests are battlegaming, arts and sciences, and class battles. Vanity received his battle name from his interest in acquiring "vanity points" for spinning blades and authentic deaths, among other things. His height and arm length benefit him in battle.

His symbol is an eight-pointed star and the All-Seeing Eye. Vanity attends regularly and his friend Gwynbleidd typically accompanies him.