"There’s a big stigma that I’m a nerd, I’m going outside dressed as a knight from the 15th century, wearing authentic armour and carrying foam weapons and shields. Now I’m going to have to deal with the stigma of being the violent nerdy guy who’s going to go around and break windows and smash banks because he’s angry at the government." 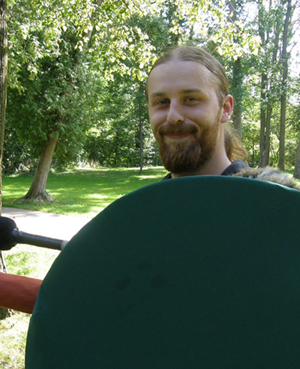 Vaskus was introduced to Amtgard long ago by his ex mother-in-law, TigerHawke. However, on one of Tigerhawke's visits to Toronto to see her son and grandson, she decided to visit Twilight Peak. She brought Vaskus with her, and the next week he was back with weapons and garb, ready to go.

During the G20 Summit in Toronto, Ontario, Brian was detained by police and had his weapons, armour and other gear confiscated. The story and accompanying photos of Brian's gear were picked up by the Globe and Mail, CBC, the Toronto Star, and the Toronto Sun, amongst many online sources. After some contact with journalists, Brian was interviewed and several articles were changed to reflect the apparent mistake officers had made.