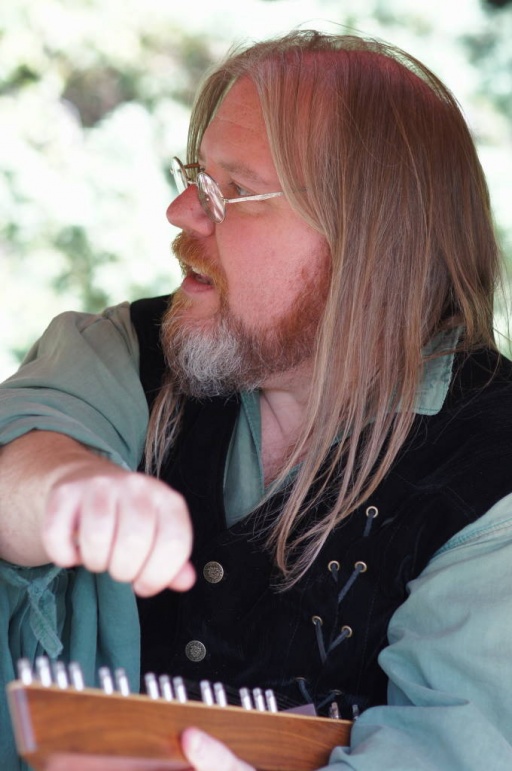 Whystler (aka. T. Shawn Johnson) is an unusual Amtgarder, being mostly about the colour and less about the battles. As a fantasy artist, with a history in the Society for Creative Anachronism (SCA) and a present in the gaming industry and fantasy faires, Whystler was happy to find AmtGard for it's blending of history and fantasy in an organization. He graduated from the University of Guelph in Music and Fine Art with a speciality in early music performance (particularly medieval and renaissance time periods). He also studied early musical instrument design, and early dance reconstruction in the SCA.

Within the last 10 years, Whystler has worked in the area of digital design for fantasy games, 3d printers and laser cutters. Previous to this he made a living as a clay sculptor and vendor at Renaissance Faires. He brings these skills to Amtgard with a focus on artifacts that fit within the medieval fantasy realm.

In August of 2013, Whystler visited White Stone Valley while networking for Faery Fest's "Enchanted Ground", a local Fantasy Arts festival looking to expand an initiative called "Enchanted Con" (an outdoor convention geared towards LARPing). He joined formally by paying dues at White Stone Valley's October 2013 coronation, where he organized a Quest for adventure parties entitled "The Tower at Wood's Edge". Later that month he visited Felfrost and The Nine Blades for their respective coronations and midreigns, taking second place in the Imperial DragonMaster Tourney at which point it was confirmed that he was seriously charmed by Amtgard.

At the January 18th 2014 Midreign of White Stone Valley, Whystler was given the non-noble title of "Captain Sassy". This nickname was created by Dartner Fisklang, not long after Whystler's arrival in Amtgard in response to his no nonsense, yet humour-bent chiding when pointing out instances of dishonour and lazy thinking.

In April of 2014, Whystler stepped up as Sheriff of White Stone Valley, and then continued for a second term as Baron in October of 2014. Upon stepping down in April 2015, he received the title of Baronet.