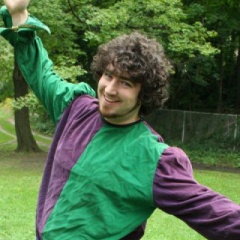 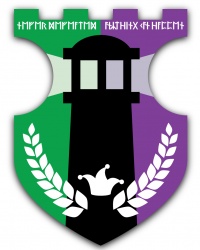 Eyes Shut, Soul Free
I'm You, You're Me
Come and follow in this trance
Drop your arms and start to dance!
- Wunjo's V6/V7 Charm Rhyme

Wunjo AKA Tyler Salvador started playing V6 Amtgard in 2002 in Wolvenfang, then a Barony under Goldenvale. Starting with Barbarian, Wunjo eventually found his calling when switched to Bard. The large field meant battlegames were plentiful and pretty casual so he was able to focus on singing and merry-making while still being effective. Wunjo became known for setting up large Legend spells with engaging songs that would attract players that weren't event under it's effects! He received his Master Bard in 2006.

In 2005, he largely fell from the Amtgard scene until he moved to Toronto, Ontario and helped restart the defunct park, Mor Tur, reviving it alongside Nathanial Goldenleaf, Ursus, Calin, Glithus, Dracious, Wei Ying and Ausric. Wunjo's name submission was chosen by popular vote and the renewed park was christened Twilight Peak. During this time he also designed the heraldry for the Nine Blades while it was known as the Northern Empire.

Over the following years Wunjo would come to find his niche in the game as a quest-writer and game-runner. After being Twilight Peak's primary questmaster for years. Wunjo eventually set his sights on furthering his claim to the Smith ladder so he started to run other types of events. In 2008, Wunjo created the Godstone Fair, a medieval carnival (with games and prizes) designed to provide a positive, non-combat roleplay environment at large events. Debuting at ]]Battle of the Dens]] 2008, Wunjo would run the Fair at BOTD and Great Eastern every year until 2010. Also during this time, Wunjo created the Pitmaster Championship. a best-of-the-best fighting tournament to award a hand-crafted, leather wrestling belt to the best fighter in the north. After many alterations to it's distribution method, the Pitmaster Belt and it's 2v2 counterpart, the Gladiator Belts, would eventually find homes at Battle of the Dens and Team Tactics respectively as the yearly prize for winning their associated tournaments. Wunjo still supervises their distribution to this day.

In 2011, Wunjo dropped from the Amtgard scene once again due to work. He continued to monitor the Pitmaster Championship but other than that was largely inactive, maintaining connections with the game only through his friends.

In early 2016, Wunjo discovered a busy Wednesday field in the Barony or Linnagond (Peterborough, Ontario) and was finally able to fully return to the game. Quickly falling back into his old role as quest-master and game-runner, Wunjo learned the new v8 ruleset simply by watching others play. His time away had faded the memories of v7 and made this transition fairly painless. The biggest difference in v8 was the vastly changed Bard class. With v7 Charm and Legend gone, Wunjo felt the class no longer fulfilled the role that he enjoyed (and earned his masterhood with), so Wunjo switched his main class to Wizard - a class that now suited his tastes better.

Around the same time, Wunjo and Dorcas began working on a prototype for a new type of competitive battlegame format, the Phoenix League. Over the next year, Wunjo would build the Phoenix League Team and playtest the format extensively. In May 2016, the League announced itself to the international Amtgard community and was an immediate hit. Since then, Wunjo has been spending his time running and coordinating league-events with his team-members in kingdoms across Amtgard. In November 2016, Wunjo spearheaded a companion project to the Phoenix League format, the Paragon Academy, a Discord-based learning environment to help players strive and achieve class paragonhood.

In 2018, Wunjo joined an early, unofficial Amtgard V9 team led by Sir Manama Proster. In 2019, the Inter-Kingdom Circle of Monarchs merged Manama's Team with another unofficial V9 team that was being led by Sir Korderellin and christened this new combined team as an official Amtgard committee.

Over the course of the next year, Wunjo cemented himself as the driving force behind the official V9 team and in 2020, he was made the new Team Lead by his peers and officially moved into the role of Director of V9 Development at the 2020 IKCOM meeting. He continues to work in this capacity to this day.

Also during 2020, Wunjo worked tirelessly to prepare the Kingdom Bid for the Nine Blades, who succeeded in becoming the 22nd Kingdom of Amtgard at the 2020 IKCOM meeting.

(Listed in order of creation)

WUNJO BALLO
Current Status: Alive - Retired
A human bard raised by dwarven troubadours and taught the art of spell-singing, Wunjo adventured through Wolvenfang before settling down and founding a harbor-front inn/casino in Twilight Peak.

GUMMY THE GREMLIN
Curent Status: Deceased - Retired
A gremlin that lived in the catacombs beneath Wolvenfang. He was the friend and companion of Wunjo during his time there. Gummy was killed during a rebellion against the necromancer Vecna.

CAPTAIN JAMES HAMUS
Current Status: Crystallized - Retired
An air-ship pirate who gained magical powers when struck by a bolt of Twilightning. The energy that gave him his powers also slowly transformed him into twilight crystal until he was nothing but a shimmering statue. His crew keeps his body on board his ship to this day in hopes that one day they will find a way to reverse the crystallization.

BARRY RASP
Current Status: Alive - Retired
A researcher in the style of Dr. Frankenstein, Rasp created a quicksilver heart that granted immortality to it's host as long as the heart itself remained intact. He was coerced and controlled by the mind-flayer Yxvanzantul into summoning the arch-demon Ghur to Twilight Peak. After Yxvanzantul's defeat, Rasp continued to serve the demon, Ghur, in exchange for the restoration of his mind. His whereabouts are currently unknown.

ZAZIL GLADERUNNER
Current Status: Alive - Retired
A free-spirited but noble satyr, Zazil was recruited to the Ebon Order after assisting with the fight against Ghur in Twilight Peak. After fighting with them for some time, he eventually left the company and returned to his life as a carefree resident of the western woods.

JACK THE SCHOLAR
Curent Status: Alive - Active
A human scholar who spent his whole life pursuing the knowledge of other worlds and extra-dimensional travel. He taught at the Twiilight Peak Arcane Academy and discovered the bubble-world of Jarek. He currently resides in a pocket dimension of his own creation which holds the campus of the Paragon Academy, of which he is the acting Headmaster.

M.A.U.R.I.C.E.
Current Status: Alive - Retired
A human-sized marionette golem created by Wunjo to be sent on adventures that were deemed "too dangerous" for the master bard to go on himself. His name stands for "Manually Animated, Ultra-Resilient, Independent Character Experiment". He can be controlled remotely but typically acts autonomously, learning from his companions as he goes.

GUMJAW
Current Status: Alive - Active
A troll shaman from the swamps of Linnagond. Due to his extreme regeneration (think Wolverine), the old troll has been around for centuries. He acts as an occasional guide and a mentor to the heroes of Linnagond.

GARFIELD THE SKELETON
Current Status: Alive...? - Active
A sentient skeleton and leader of Hollowhome, a fort in the Northwest part of Linnagond. Originally an enemy in the Skeleton War, Garfield now helps the people of Linnagond while developing his new "Skeleton Culture" and moonlighting as a Grim Reaper for the plane of Amtgardia.