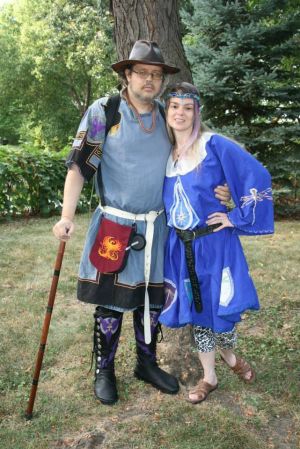 Began playing Amtgard in 1989. Founder of the Darkjesters and a founding member of the Phoenix Guard. He has resided in several kingdoms, including the Celestial Kingdom, the Iron Mountains, the Rising Winds, and Dragonspine. Zodiac served the Celestial Kingdom as king in reign 17 and earned both Knight of the Crown and Knight of the Flame before moving to Dragonspine, where he swept several tournaments and became a Warlord.

Zodiac was #5 on the Top Ten Most Famous Amtgarders list of 2002 published by the Electric Samurai. One of the founding members of Starmount under the Iron Mountains, he was instrumental in building the park and gaining its acceptance into the Principality of the Rosetta Pact (now defunct). He was inducted into the Amtgard Hall of Fame in 2013.