Aust Nailo 'The Bloody', of the Ivory Tower, in Rivermoor 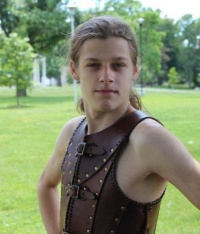 "Do you know how few websites allow you to put umlauts on i's? Damn few."

”One time Aust and I were visiting a friend in the hospital after park in garb. No problem, except that Aust has this shirt soaked in pigs blood and we didn't know where we were going. The staff was pretty nervous about two medieval warriors wandering around a hospital, one appearing to be fatally wounded...” -Kite

Aust started participating at Ivory Tower in January 2008, after showing interest when his sister Silvia joined. He moved to Lands End in Autumn of 2014. Aust plays as a very good monk or wizard.

First Baron of Lands End when it went to being a Barony.

Fighting in the monk lilypad battle against Ol' Man Ganyo