Archduke Sir Broton Locksalt, Paragon Assassin, Barbarian, and Bard of Greenharbor in the Kingdom of Polaris 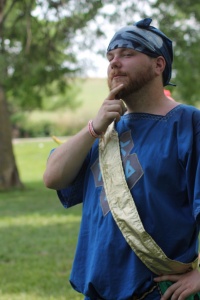 ”If the key is on the table it means Broton is here.”
"You look like you're in the know... where all the single ladies at?"
"Murder, brought to you by "Power Aide", now in Agent Orange!"
"I am doing a little hot!"
"I'm brilliant as well as skilled, it's a great burden, all of that on top of my angelic good looks, but I try to soldier on as best I can."

-In game brother of Bromos

Broton at Curse of the Great Pumpkin, 2010

Also is the bearer of squirrel. Which was planted in his beard after being tamed by Rayhawk.