A Duchy in the Kingdom of Rivermoor located in Merriam, KS.

Centerpoint is a powerhouse Duchy under Rivermoor that has quickly risen to take a place among the crown jewel chapters of that kingdom. Centerpoint(CP) is home to exceptionally talented players across all aspects of Amtgard. It is one of the largest chapters of Amtgard in the game, and briefly held the crown of "Single Largest Amtgard Chapter" in 2017. CP has a strong culture of talented class players, multiple high level fighters, and some of the best artisans in the Empire.

A history of Centerpoint, the chapter to survive more than a year in Kansas. Come on Nexus Shores, keep it together...

2006: Dane Pisces, VERY formerly of Rogue's Haven (Tyler, TX), digs "The Ghetto Blaster" out of his closet while moving. This inspires him to make a handful more weapons and to start beating on his friends with them. Inevitably, said friends make weapons of their own and begin to fight back. This is the beginning of our shire, 6 months spent beating one another with half-finished weapons.

2007: Tenebrus gets fed up with Dane's lack of vision and moves the park to a better location. Furthermore, he recruits new members and generally Re-Founds the park. Diermuid and Tigger deCat, two Veteran player's join and help get the park to look more like Amtgard. Centerpoint peaks it's attendance at 19 people just before the winter sets in. Discussions begin in earnest about moving away from Freehold status.

2008: Numbers trail off throughout the winter, but begin to climb again as march approaches. Our first formal Mid-reign has 26 in attendance. Our Third Coronation becomes our largest event yet, and is generally just a huge gathering of Freehold People.(42!) Tenebrus is elected Sheriff with his brothers Biggs and Wedge filling in the Positions of Champion and Regent respectively. November 8th, 2008, Tigger deCat became the first non-founding member of the park to hold the office of Sheriff.

2009: Off to a good start. Less than 1 week into the year and we finally got accepted into the Principality of Rivermoor! The Mid-reign was locals only but still over 20 people, many awards were handed out, including the title of 'shield maiden' to Jazzie Riordan and a special item 'The Pie' to Lily, for winning the weekly food and drink competition. Striker took home the most awards due to his quick dedication to Centerpoint and all that Amtgard stands for.

2010: Centerpoint is growing again thanks to Tigger deCat's initiative to start up a meetup group. Tigger deCat won the Rivermoor Dragonmaster cloak by placing 2nd place (top placement by a Rivermoor participant) in their midreign arts competition.

Striker was sheriff for the 1st half of the year and ran some great games for us under his theme of 'Let's play Amtgard'. His midreign was a fun-filled pancake feast. Striker was appointed a member of Rivermoor's guard.

Lily River was the sheriff for the second half of the year under a theme of 'Centerpoint in Wonderland'. The midreign feast under Lily's reign was a Barbaric Tea Party with a human checkers match. Centerpoint attended the Rivermoor midreign in full force and swept the DragonMaster competition. Lily River took the dragonmaster title by placing 1st place. Rivermoor awarded all of Centerpoint a Flame award for the outstanding showing at the DragonMaster competition. In the Fall Tigger deCat was elected Sheriff, and Striker as Regent. Tigger has proclaimed this to be reign of monsters, and is encouraging everyone to come up with Monster Garb. Striker brought home the DragonMaster Cloak from the January Competition. That's the third time in a row Centerpoint has won, but who's counting.

2011: The Beginning of the Dark times. Due to mundane drama and poor leadership the park falls to a low of 3 players. The remaining members move the chapter to Antioch park, where it has remained since.

2012- 2015: The Dark times. through these years the park hangs on by a thread, sometimes experiencing upswings in membership but failing to retain new members.

2015: Tenebrus moves back to the area. After some time settling in, he returns to CP where he immediately begins to run his "backyard to Barony" playbook in an effort to recruit and retain new members. It WORKS, and by the end of the year average attendance has tripled and total membership is around 30-40.

2017:On January 21st, 2017 by Emperor Romku of Rivermoor CP is elevated to Duchy. Lauxus is the first Duke. By this point CP is the largest chapter of Rivermoor and is briefly the largest chapter in all of Amtgard. Poor leadership and drama after Lauxus' reign lead to a slight drop in numbers in the fall as several players opt to leave and attempt to establish a freehold nearby(they are denied a contract). Reinhart is Duke over the winter and makes the coolest awards ever. CP parties hard through a Warhammer 40k reign, and spearheads the "one Rivermoor" movement to transform Rivermoor into a true floating crown.

2018: For the first time in 10 years, a founding member takes the reigns again. Wounds are healed and the splinter group is now working towards becoming an actual Amtgard chapter with CP's blessing. An explosion of new members secures CP's place as one of the crown Jewels of Rivermoor. Life is good, whacks are awesome, and everything is Shiny. 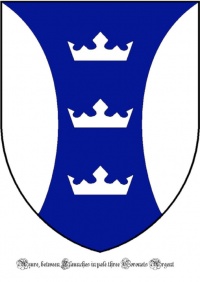 For past reigns, please see the Centerpoint Monarchy page

Coming from either I-35 North or South, take the Shawnee Mission Parkway exit. Head east to Antioch Rd (second light). Turn right on Antioch. Go about 3 blocks, the park entrance will be on your left. Once you enter you should see a rose garden on the left, then a shelter. We play just past the shelter. (at the shelter during winter.)