Relating to Armor and Leather

is the process by which leather is hardened using wax or other treatments to produce significantly harder leather. This gives one bonus armor point 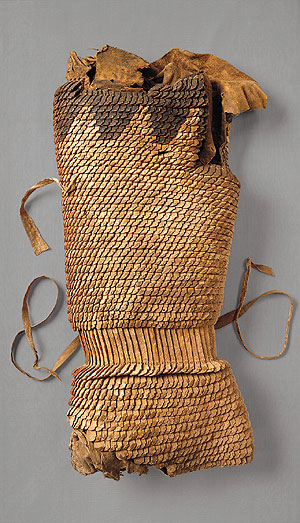 Extant Coat of Scales made of hardened leather

Cuir Bouilli is a means of making hardened and stiffened leather. Although there is some disagreement among some leatherworkers as to how this is accomplished, there is a significant amount of evidence to think that it was done by molding wet vegetable tanned leather. This leather can be formed into any number of forms, which, on drying, will retain that shape. The wet leather can be set more firmly by drying it under moderate heat, the degree of rigidity obtained being determined by the drying temperature. A faster method, which produces extremely hard and rigid shapes, is to dip the molded leather into boiling water for anywhere from 20 to 120 seconds. This technique causes the partial melting of the fixed tannin aggregates in the leather, making them plastic, causing them to flow and redistribute themselves throughout the fiber network of the leather. On cooling, the fibers become embedded in what can best be called a tough, three-dimensional, polymer network or resin, somewhat similar to the materials made by condensing formaldehyde with substances such as phenol, urea or melamine.

The molding of leather was known in Saxon times in England, and was widely practiced during the middle ages in both England and on the Continent. 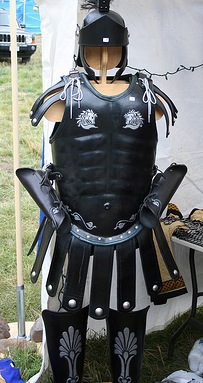