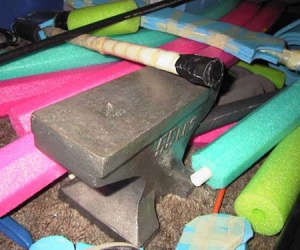 N. That which you sling.

"Foam? Shit, we didn't get foam until the late 90's. Before that we used damp pillows, soaked in napalm and wrapped around a depleted uranium core. Held together with barbed wire and ABC gum. And we LIKED it, goddammit."-Luke

The most general definition of foam is a substance that is formed by trapping many gas bubbles in a liquid or solid. It can also refer to anything that is analogous to such a phenomenon, such as quantum foam. Often people mean polyurethane foam (foam rubber), Styrofoam or some other manufactured foam when they are using the term. It can be considered a type of colloid.

From the early 20th century, various types of specially manufactured solid foams came into use. The low density of these foams made them excellent as thermal insulators and flotation devices, and their lightness and compressibility made them ideal as packing materials and stuffings. Some liquid foams, called fire retardant foams, found use in extinguishing fires, especially oil fires.

Foaming around the mouth can be a symptom of rabies in animals. The term sea foam is used to describe the foam that forms on top of seawater from the action of waves. In some ways, leavened bread is a foam, as the yeast causes the bread to rise by producing tiny bubbles of gas in the dough. 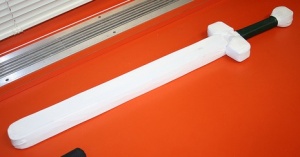 Example flat blade sword, made by Gorin of Dragonspine

In the beginning, there was the couch, heaving with off white goodness, yearning to give birth to the swords of the future. Couch foam was what is called an "Open Cell" foam. Very squishy, but tended to mold when it took on water. In the Kingdom of the Burning Lands and spreading outward to early kingdoms, this foam remained in use for nearly 6 years, and some chapters even use it today.

"I used to scavenge it from discarded couches we would find out in the desert. It would be held down by scads of duct-tape and the core would be covered by pipe insulation." -Kurse

Advancements came slowly with players forging territory through, Carpet foam, Eggcrate Foam, and the camp pad. Camp pad was popular for several reasons, a big one being because it could easily be fashioned into flat blades. It came in convenient rolls and had less tendency to take on liquids.

"camp pad is easy to work with, and it was easily accessible all year round, and it was durable. The downsides were the weight and general unfriendliness of it, but if everyone was using it it was no real problem. I got into the game late, bluefoam was on it's way out and noodle had been used for a while at that point, as my first weapons went from noodle and pvc to noodle and graphite pretty quickly.

"I guess I am kind of going backwards in tech now, using MC and bluefoam as my foam, rather than noodle."-Maxam

For a time the consensus wad that Fun Noodle was the way and the light. Though there are many adherents to MC Technology. While Funoodle was popular because it was cheap, easy to use and easy to find, MC more expensive and more difficult to locate. But, MC succeeds where Funoodle fails, in that while more expensive is also much longer lasting.

Over time the quality of foam used by jaks-pacific, makers of Fun Noodle deteriorated and their molds were smaller with a larger hole making them less and less desirable for Amtgard use. They are not allowed in most areas unless you somehow find a batch of vintage Noodle.

In its place many other foams have risen from Frost King (a high quality pipe insulation,) to aether tube and duratube. And camp pad is always there.

Example of a typical foam mace

Open cell foam has cells that are open, and so squish far more readily than a closed cell-type foam. It's a softer feel on the whole. Some open cell foam will spring back very readily; some retains the indent for some time while air works its way back into the cells. On the whole, Amtgard has more uses for open cell foam that springs back readily than foam that remains squished for some length of time.

Open cell foam can be found in things and places like: couch cushions, cheaper all-foam mattresses, certain pillows, some types of doodgeballs, eggcrate foam, craft sections of stores that also work in upholstery, and stress or yard balls.

Open cell foam can be expensive, and it can also be the cheapest foam available (free). Purchased new from craft stores in blocks of various sizes, it is moderately expensive. Scrounged from a tossed out mattress or couch, and it's free.

Open cell foam is often not a good foam for stress-bearing applications. Using it as a stand-alone hammer head, for example, can result in the foam slowly breaking down its grip on the core through shock and vibrations. To be done right, an impact weapon made solely with open-cell foam must have a lot of support from tape and the cover. It can suffer from added weight when exposed to water as it can absorb much more than it's own weight (sponges are, after all, open-cell foam). Open cell is also not very useful on it's own in many applications. Swords made only with open cell foam will often be unusable, as the core can be felt through the foam with mild compression. Arrows, too, are notorious for being dangerous when made with only uncompressed open-cell foam.

Open cell foam is excellent, though, for its shock-absorbing qualities. When coupled with compressed open-cell foam (as with some arrows), or closed cell foam (melee weapons and some arrows), it takes much of the slap and sting out of a weapon. Stabbing tips are much more friendly when made with a little open cell foam. It is also useful as shield padding, especially over a thin layer of a closed-cell foam. Open-cell foam is also very useful for spellballs, various throwing weapons, and boulders. Boulders can be as simple as bits of open-cell foam stuffed in a pillow case. With the right color, the lumpy sack of foam is easily distinguished as a boulder. Whenever you use an open cell foam, it's important to remember not to over-compress the foam, or its shock-absorbing qualities are negated.

Closed cell foam means that the tiny cells comprising the foam are closed. They don't release the air inside them. So if you squish it, it's going to feel pretty firm, and resist. Some closed cell foam, however, is not appropriate for our weapons. To be successful, a closed cell foam must not be too rigid. Styrofoam is far too rigid, and will break apart into thousands of little fluffy bits of annoyance upon striking anything. The closed cell foam used to arrange flowers has no spring, and will simply stay dented where struck. A closed cell foam must also be stiff enough to keep from compressing too much on a hit. Some pipe insulations that feel heavy and "rubbery" compress far too much and hurt like all blazes when used.

Closed cell foam can be very rigid, and stiff, thus making weapons built with it hurt if applied incorrectly. Some closed cell foams benefit from a layer of open cell foam over the top to reduce the sting of the weapon. Many, however, are ok to use as they are.

Closed cell foam is very light in weight for it's strength, and is often useful in gluing applications. Spray-on carpet glue, DAP, and other glues can work to help hold your creation together on the inside, saving the need for weighty tape. Some foams do not glue well, and some glues eat foam. Just try small pieces at first to discover what works. Closed cell foam is also easy to cut and shape with a sharp knife or scissors. Its ability to resist tape and cloth compressing it gives it the ability to hold a distinct edge- something many people desire in flatbladed weapons. Most any weapon can be made from closed cell foam, though sometimes an addition of a small amount of open cell foam is desired or needed.

Many people now enjoy making shields entirely from foam. Bodyboards and boogieboards made from a hard, stiff closed cell foam are light, but need extra padding on the edges due to their hardness. Polyethylene Plank Foam (plank foam) also makes a light, fairly durable shield. It doesn't need any extra padding, as it is soft enough to cushion any impact.