Baron Hagar Silverdragon, Sounder of the Horn, of Dark Shores, Kingdom of Polaris 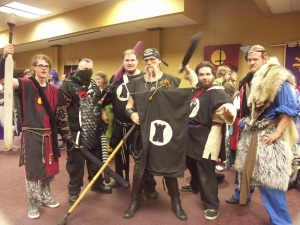 Baron Hagar standing with his team of Dark Tower Brothers at Dungeon Day 2016.

Baron Hagar Silverdragon joined the Shire of Three Rivers in 2003. In 2006, he voluntarily stepped aside from Amtgard due to mundane reasons. When he returned to Amtgard in the summer of 2011, he found that Three Rivers had dissolved and a new park called Dark Shores was now thriving in the area. He quickly became a leading member of the park and has been very vocal in his support of Polaris' bid for Kingdom.

Baron Hagar is a formidable force on the field and can often be heard from across the field yelling his countdown for fight after death.

Man at Arms to Garik Morden

Once stopped an entire ditch from 200 yards away.

"Sounder of the Horn"

Tied for Flurb of the Year in 2014 with Mishka Thundervoice