Long Live the Gate! Forever may she stand! 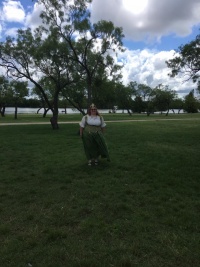 My story is long and a hard one to tell. I have always been different. Not the kind of different that can be explained or easily over looked. I am a Saurial, a human/dragon hybrid. Problem: I hate dragons. I detest and loathe them. I hate myself for what is within me. I have done many things to keep myself human, including taking in two human children, Gunnar the Assassin and Pierce the Sarcastic and Witty, so that people will hopefully look past the dragon-like features and the scales that won't come off my hands and feet. I have gone to the extremes, taking a Witcher named Raz Tor Desh hostage so that he can use his magic to keep me looking human so that people will never know my deepest, darkest secret. So why am I telling you this now? Every story has a beginning, and this is mine.

I started off with my son Gunnar in a small tavern in Canyon, Texas where a kind elf took me in and showed me his people and the ways of Amtgard. I believe he took pity on my looks and secretly wanted to take my son from me for his safety, but that's a story for another time. We spent many days with these people and I learned the ways of a Monk, as I had always lived my life in solitude because of my hideous appearance. I then learned of the magic within Amtgard and wanted to walk the path of the Druid. After spending time with the people of Raven's Cross and serving them as Regent, I was asked to help another park to grow and where my creative mind could run wild, so Gunnar and I relocated to Lubbock, Texas, to Irongate.

Since taking the path of the Druid, I decided that I needed better transportation and a way to swoop down on my enemies so they wouldn't see my spells and magic coming. I took prisoner a Dragon and named her Hainley, I keep her in chains in my basement to prove that I am better than the Dragons, even though deep down I know that Dragons lurk within my own blood. My hatred knows no bounds. I spent six months as Regent of the Duchy of Irongate but wanted to help more, so now, I serve as their Duchess. It is my hope to rid the land of all Dragons (except of course my secretly beloved Hainley, who's scales you can see adorning my belt).

My hatred for the race of the Dragon (and no offense to any Dragons reading this), has even driven me to become Captain of a Fighting Company, the Draco Venatores. We will rid the Golden Plains of the Dragons (anyone touching my Hainley shall die!).

A few other things I suppose I should mention. I am belted as a Woman at Arms under the infamous pirate Sir Bloody Jack Flint and part of the Sir Hern Sablewolf bloodline. (Obviously, wolves and pirates are acceptable company for a strange looking dragon/human hybrid). I am an Amazon (brought up at the Gathering of the Clans July 22, 2017), I am a student of Druidry at the Paragon Academy, a member of the House Continuance, a member of the Darkening Forest House of Owls (Owlet).

Keep an eye out, as my story is ever evolving and ever changing. There's always something new in the world of the Irongate, and what other good is there for a Saurial than to entertain...