Squire Lord Kevetor, The Root, The Wasp Slayer, Trunk Dwarf, Esquire of Ironwood in the Kingdom of the Wetlands 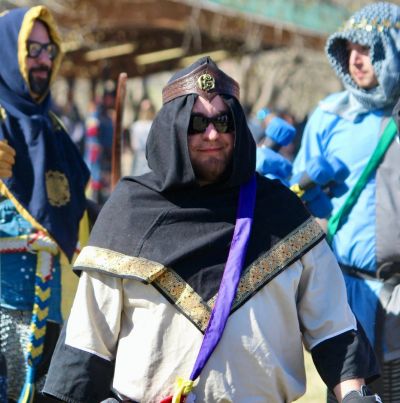 Started out at Mourningwood Glen.

Started playing Amtgard in 2009 soon after graduating from high school. He was first introduced to it by a small story about it in the Star Telegram. Served as Pro-Tem champion of Mourningwood Glen During the reign of Alby Kazan. He attended his first event at EH Midreign at this time and was very disappointed by the turn out and lack of battlegames. The next week he drove out to the Celestial Kingdom and attended his first Spring War where he enjoyed fighting a wide range of people. Has relocated to the Wetlands as of 2018 and continues to learn wherever he can.

He is a fucking Wizard