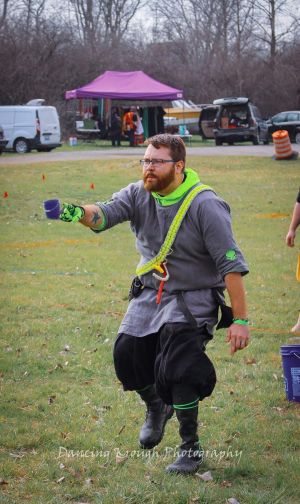 Began Amtgard in August 2015 in the Kingdom of Crystal Groves. Soon after, took a belt from Jax Arkain and started running monarchy positions at his home park of Mountain of the Sixth Dawn. Stayed with Jax for a while before the two parted ways with Neon's path leading him in new directions. From this split, Neon took Ommojob and Duracell along with him as an At-Arms and Page, respectively. Soon after, he met and adopted Leo as well.

Mountain of the Sixth Dawn voted to move away from the Kingdom of Crystal Groves in the summer of 2017, when the group decided to move to The Kingdom of the Rising Winds in favor of being in a kingdom where they were closer to a much larger portion of the kingdom. Neon immediately joined the Board of Directors, serving as "Vice Chairman" for a while until serving as "Chairman" of the BOD. It was on the Rising Winds BOD where Neon met Kaio and the two became quick friends. It was this relationship that led Neon to accept a belting offer from Kaio. Following this, Neon adopted Percival, another M6D native.

Since joining the Rising Winds, Neon has continued to serve in local park monarchy, Midgard monarchy, and Kingdom monarchy-- even holding the Champion position at all three levels simultaneously because he has zero self control [v=