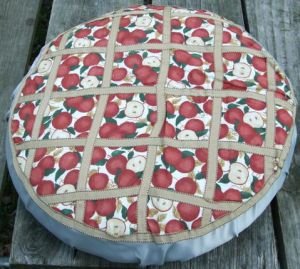 The Pie Shield is our quarterly trophy item for the weekly food event we do at Centerpoint. Each week during a quarter people can sign up to bring homemade food or drink to the weekly park event to be judged and then shared by those at the park. Originally this was done to get some warm foods at the park during cold weather days but we decided that it was such a big hit that we're doing it year round now. Prior to Coronation and Mid-reigns we look at all the entries for that quarter and the creator of the food or drink that recieved the highest score for that quarter wins the Pie Shield. The winner of the Pie Shield gets their name added to the list of winners which is on the inside of the shield along with the shields magical abilities.

The Pie Shield itself is a small round Amtgard shield. Centerpoint's Pie Shield looks and actually smells just like an apple pie though other parks could use a different type of pie if they so desired to use this idea. Notice that this magic relic is designed to be a park specific relic, therefore any park may have one and there could be more than one on a battlefield where multiple parks are competing. The magical ability of the Pie Shield is as follows: (Note, this is also printed inside of the shield along with the winners names)

Anyone whose class and level would allow them to carry a shield can use The Pie as a standard small shield. (Magic users must still pay magic points to use as a shield.)

Anyone except Barbarians, (because barbarians don’t share their pie,) can use the spell, Magic of The Pie, as written below, even if they are not using The Pie as a shield. You must however still have The Pie on your person when you use Magic of The Pie

Magic of The Pie

Caster: The owner of The Pie

Uses: Once per game

Incantation: Designate target and say, “Pie is good. Pie is great. Let’s have pie before it’s too late!”

Effect: Owner of The Pie and target must sit down with The Pie between them and have a “tea party,” pretending to eat the pie for a 150 count. No outside force can effect or kill those having the tea party. After the 150 count both players stand up and can rejoin the battle once they loudly say, “finished with the pie!”

Notes: Works on humanoid type monsters that are the same size or smaller than a human.

Winners of the Pie