A chapter of the Kingdom of Westmarch, located in Santa Cruz, CA. 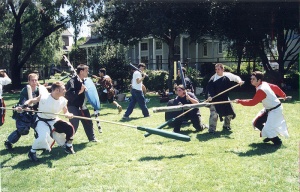 Wavehaven was formed in the summer of 1994 by Jim Henry (Sir Jetara), an Amtgarder from Las Cruces, NM. After a few weeks of living in California, he and his wife, Dos Henry, decided to begin their own land there. They put out flyers and contacted a local gaming league looking for interested individuals. A few weeks later the first meeting of Wavehaven was held, with only about eight people coming to the field. After a few months their membership grew to about twenty people a week and it was recognized as a Shire under the Kingdom of Dragonspine.

Five years later Wavehaven's population had grown, at times having over forty people at the field. Since then, Jim Henry has left the land, but Wavehaven has thrived on its own. Wavehaven gained Duchy status under Dragonspine, and has several formidable fighters and some excellent artisans. The Duchy hosts Darkshore every Memorial Day Weekend.

After 20 years of soaking up endless quantities of imaginary blood , the salted earth of the original holdings in Frederick Street Park were split by massive, grotesque fissures which spewed a fog of blood into the sky, forcing the relocation of the peasantry towards the east- to the previously unmapped wilds of Disco Valley. The affected population was transferred by cruel fate to this distant region, perhaps not suited to their way of life, causing them the loss of all immovable property and substantial psychological harm. Hopes for reclamation of their homeland have been completely abandoned, as it would involve difficult removal of a substantial length of dog fence.

Wavehaven was a founding land of the Principality of Westmarch. Since the ascension to Kingdom, Wavehaven continues to serve as a Core Land of the Kingdom and provides a stable crop of fighters, crafters and leaders for Westmarch.

History of the Wavehaven Monarchy

We meet every Saturday starting from 11pm to 3pm at Brommer Park in Santa Cruz, CA.